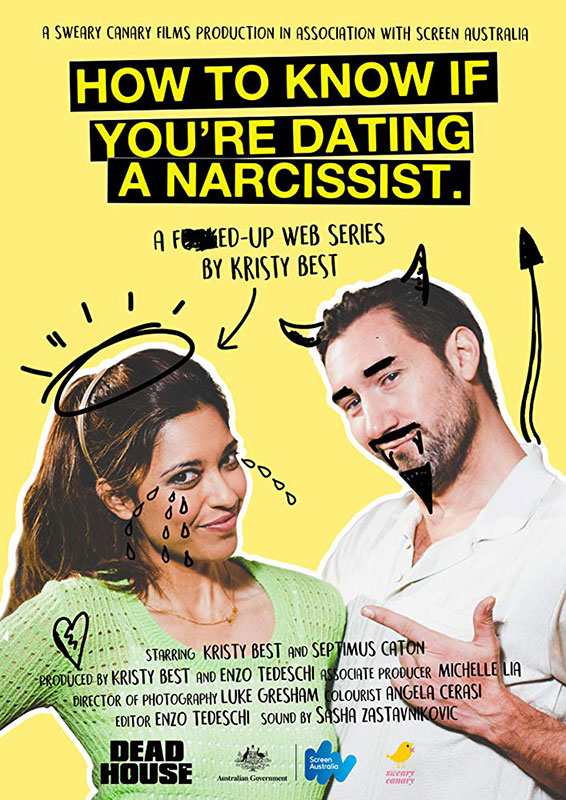 We say “sort of” in the sense that while it’s not super hilarious, it’s the kind of show that’s pitched well to the sort of audience who could gain a lot from watching it: teenagers. How to Know If You’re Dating a Narcissist is a no-holds-barred and informative look at manipulative boyfriends*, without feeling like the sort of preachy videos you get shown at school in sex-ed classes.

Spread across six 4-minute episodes, and available on YouTube, How to Know If You’re Dating a Narcissist shows Kristy enact scenes as a woman in love with narcissist Derek (played by Septimus Caton). Derek starts out as the perfect boyfriend, declaring his love for her, booking them a trip to Paris, moving in, and then he turns bad, taking money from her, belittling her, trying to come between her and her closest friends, becoming paranoid about her relationships with other males and even trying to stop her from eating pasta as she’s “getting fat” (she isn’t). This is intercut with analysis of what’s happening from Kirsty and tips for spotting and surviving a narcissist – including an entire episode on how to break up with one.

It’s funny, Kristy and Septimus are brilliant in their roles, and it comes from real-life experience, as Kristy self-describes as a survivor of multiple narcissistic boyfriends. We also like Kristy’s ability to make Derek go to sleep at the click of her fingers (and wish we had that power sometimes).

Finding these videos on YouTube isn’t easy if you search by title, as there are multiple other, more serious takes, on this subject – so here’s a link – but with #MeToo continuing to play out, this remains a highly topical.

You might argue this isn’t strictly a comedy, and that’s true, but it beats the hell out of Content, which started out okay but quickly fizzled out, and Sarah’s Channel, which wasn’t exactly the most hilarious show ever. How to Know If You’re Dating a Narcissist gets points from us for providing a public service and being funny. Something which isn’t easy to pull off.