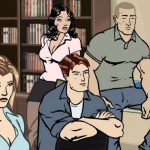 Two weeks in and the verdict on Working Dog’s new animated comedy series Pacific Heat is… well, it’s not positive. And fair enough too: for 2016, it’s a great example of 1980s comedy. It’s not news that Working Dog’s sense of humour hasn’t been cutting edge since around the mid-90s, but in animation – where... Read More »

Parody isn’t exactly the lowest form of comedy, but the law of diminishing returns kicks in pretty fast when your jokes are all about making fun of something else. And Danger 5 wasn’t even a parody of anything real; anyone trying to tell you otherwise wasn’t paying attention last time their local cinema put on... Read More »

Making its TV debut on SBS last Monday was Danger 5, the cheesy 1960s action series send-up that pits five international spies against the Nazis. Oh, and they have to kill Hitler too. Sounds like a hoot,... Read More »

Can you remember the last time anyone produced a full length scripted comedy show for a mainstream radio station? Apart from ABC Local’s lacklustre 2008 new talent scheme The Comedy Hour? You probably have to go back as far as the late 70s or early... Read More »