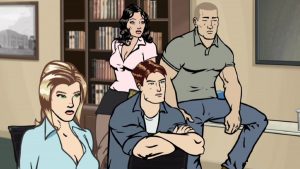 In things we missed news, Pacific Heat finished up its premiere run on Foxtel’s The Comedy Channel a few weeks ago. You didn’t notice either? Fair enough. It was a kind of a “miss it and it doesn’t matter” show.

A parody of a cop show should have been an easy win for Working Dog given they’ve done them several times before (albeit with varying levels of success) but Pacific Heat didn’t quite work. Sure, it had quite a high gag rate – and if there’s one thing Working Dog are good at, it’s loading their scripts with a certain type of easy-laughing-getting, old-school gag – but unfortunately, old-school also included ethnic stereotyping of the sort we thought mainstream comedy had left behind several decades ago. And for us, there’s not a lot of laughs to be had in Me No Rikey.

And speaking of several decades ago, what was Pacific Heat parodying exactly? Because apart from the team having access to modern-day forensics and a tech woman with an amazing database and hacking skills, this didn’t seem like a parody of anything recent. Police procedurals in the past decade have moved beyond the more trad-style NCIS-type shows, and into psychological thriller territory (The Killing, The Bridge, Broadchurch) or been set in times past (Ashes to Ashes, The Doctor Blake Mysteries). This felt like a parody of something made in the 70’s – something, as we said above, that Working Dog have done well in the past – but set in the modern day. Whatever it was, it didn’t quite work, and it didn’t sit right. And as so-so as it was, at least Funky Squad knew what it was trying to be.

And what with that, and the fact that almost every episode had the same plot – some ethnic stereotype bad dudes have done something bad and our sometimes-bungling heroes have to save the day – well, it’s no wonder we kept forgetting to tune in.