Last One Laughing (the first two episodes of which are now streaming on Amazon Prime) answers a question no one was asking: what happens when comedians play to absolute silence?

Now, to be fair to the makers of this show, it’s important to remember that Last One Laughing was conceived and shot well before lockdown. You remember before lockdown – when no one imagined that live comedy would become comedians in their homes performing to their laptop cameras for an audience they can’t really see or hear or react to.

So, given that our live comedy future will increasingly feature small, distant or quiet audiences, Last One Laughing is, perhaps, of the moment. A TV iteration of live comedy without an instant reaction.

The concept of Last One Laughing is this: Rebel Wilson oversees a sort of Big Brother house in which ten comedians are locked for six hours. During the six hours, the comedians have to try and make each other laugh, but if anyone does laugh – and Rebel can see if they do because she’s got an elaborate control room-type thing – they’re kicked out. The last one left, i.e. the one who hasn’t laughed gets $100,000. 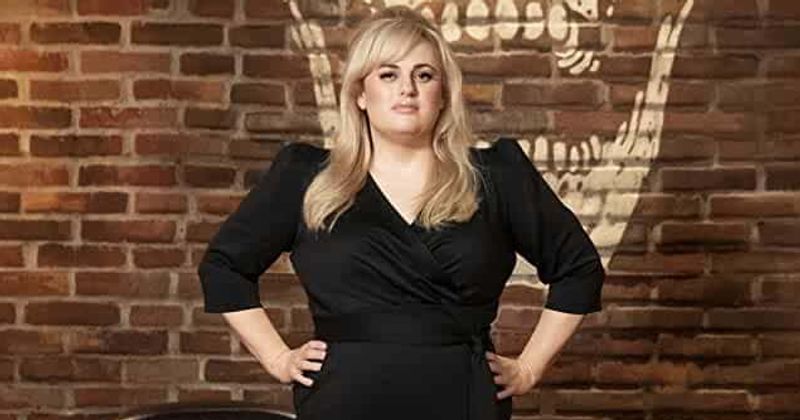 So, let’s just say our ten comedians pull out all the stops to get that $100,000. And, perhaps unsurprisingly, the more surreal and surprising the comedian, the wackier they go and the more laughs they get.

Anne Edmonds is the first to make one of the ten laugh, with a cutting and beautifully-timed comment that most would struggle to keep a straight face at. Sam Simmons brings his A-game too, wearing some bizarre costumes (including a Home & Away school dress and a jacket covered in floppy penises) before he decides to dispense with the silly outfits and strip down nude and sit in a paddling pool, encouraging the other comedians to pour Fanta on him. This turns out to be the least funny of his routines.

Frank Woodley also busts out a few wacky props and costumes, although Simmons consistently outdoes him simply by being more bizarre.

Others on the show – Nazeem Hussain, Joel Creasey, Dilruk Jayasinha, Ed Kavalee, Becky Lucas, Nick Cody and Susie Youssef – take more of a backseat in the first couple of episodes, focusing on getting laughs in lower-key ways. And, of course, desperately trying not to laugh at all the crazy stuff happening around them.

As for who will be the last one laughing, it’s hard to tell. Sam Simmons looks incredibly difficult to crack up and hasn’t come close once, but some of the quieter comics also seem to be brilliant deadpanners. Ed Kavalee was tipped as one-to-watch, and based on his performance so far, he’s definitely a contender.

The element of surprise or sudden shock will probably be the winning weapon, though, and if Simmons, Edmonds or Woodley make it to the end, they’ll be tough competitors.

We still can’t help but think this is ultimately a bad way to do comedy, though. In a pre-COVID world, what was the point of making comedy seem less funny by forcing the live audience not to react to it? And even in a post-COVID world, why wouldn’t you want comedy to be as funny as possible? It’s certainly possible to make an audience you can’t hear or see laugh – comedians on TV and radio have been doing that for years – but live comedy often gets its spark because it responds to the audience.

And that’s what’s missing here: spark. There are some individual funny moments but no sustained laughs. The comedian-audience are distracted from being funny because they need to stop themselves from laughing in order to win the cash. So, their eyes aren’t on what should be their real job, here: making us at home laugh.