This year’s Pilot Week on 10 has been something of a disappointment for those who really hoped the future of television might still have room for people who actually write television. And that disappointment extends to Part Time Private Eyes, the only scripted show getting a go on Pilot Week this year; technically a comedy, it would have been a lot better if they’d extended the run time and gone for an actual mystery to keep audiences engaged. 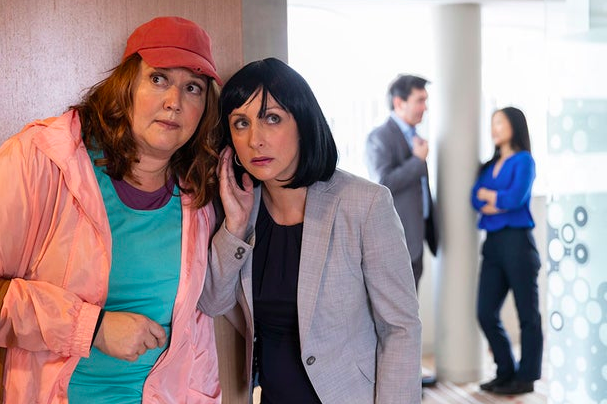 It’s the kind of idea you’d expect to see from the UK and you just know writers-creators-stars Heidi Arena and Nicola Parry have one eye on those overseas format sales because that’s just how television works these days. Oh right, the idea: Val (Arena) is a chatty, overly friendly mum, Alex (Parry) is a somewhat classier / more uptight mum, and with nothing much on between 9am and 3pm (and with bills to pay in Alex’s case), they decide to help out a fellow mum (Nadine Garner), who’s wondering if her husband is cheating on her.

That’s a fair bit of set up for a half hour sitcom and as previously mentioned here a thousand times over, Australian sitcoms are not exactly known for their fast pace. So the “investigation” basically involves following the husband to a dental clinic, deciding he’s obviously cheating because he adjusts his fly when he comes out, going back to his house and breaking in for some reason, realising that he’s not cheating – he’s just going through a mid-life crisis and getting his teeth fixed – then having to hide in a closet and farting a lot.

The farting is the funny part.

Arena and Parry are a fun double act and it’s totally reasonable to hope this goes to series simply because they have a lot of promise, but as a half hour show this either should have been a lot funnier or a lot faster. It needed at least one more decent reversal to feel satisfying as a mystery (no, having the wife go “I wanted him to be cheating so I could dump him” doesn’t cut it), and if it’s going to be a straight-up comedy then the two main situations (at the dental clinic and then at his house) needed to be funnier. Donut farts will only take you so far.

The thing is, if Pilot Week really is about finding pilots that are worth taking to series then there’s probably enough promise shown here to give Part Time Private Eyes the green light. It’s a lot easier to come up with a quality mystery than it is a decent sitcom so our totally unsolicited and unwanted advice would be to make it an hour-long show, come up with some decent plot twists each episode, and rely on the banter and chemistry between Arena and Parry to keep the tone light and provide the occasional chuckle as they get in over their heads.

The trouble with making this work if it stays as a sitcom is that they’ll have to set up a whole new scenario each week – new mystery, new characters, new locations – and doing that is going to take up valuable time. Sitcoms that involve new characters each week almost always have the new characters coming to the regulars; they’re set in bars, hotels, coffee shops, whatever. Adding one new element to a regular situation creates comedy – dropping your characters into a new world each week requires a lot more skill if you’re going to avoid having a third of the show turning into exposition.

Put another way, you need to do more to get laughs than just slap a comedy wig on your character.