Ten took their time to make a full series of Drunk History Australia, one of the better pilots from 2018’s Pilot Week. Has it been worth the wait? 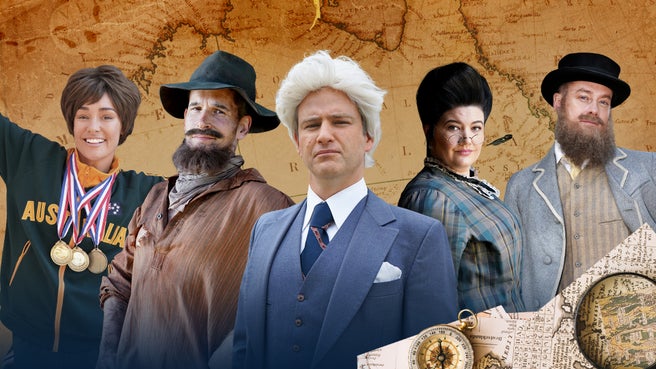 Well, try and stop us laughing at Wayne Hope as cannibal convict Alexander Pearce, as he chomps and slurps his way through some human ribs. But then Hope knows how to nail visual comedy, every succulent, gleeful bite of it.

Em Rusciano is pretty funny too, struggling with a glass coaster that keeps sticking to her cocktail glass, as she tries to drunkenly tell the story of Olympian and flag-pinching ratbag Dawn Fraser. And James Matheson, recounting the tale of the dismissal of Gough Whitlam, brings a lot more to his telling than the average storyteller.

Matheson, like all the best performers on this show, knows how to hit his drunk comedy sweet-spot, where he’s just sober enough to be able to harness his drunkenness for comic effect but not so pissed that he’s ended up all dull and maudlin, and incapable of telling a joke.

Less successful, and very much down the dull and maudlin end of the spectrum is Matt Okine, who tries to get laughs by using the language of rap to explain how Banjo Patterson came to write ‘Waltzing Matilda’. It was a nice try but didn’t quite work. We enjoyed Tex Perkins as Banjo Patterson though.

And, in fact, most of the supporting cast, who have to act out the narrators’ nonsense for us at home, are pretty good. They include some well-known local comedy types, such as Greta-Lee Jackson as Malcolm Fraser, Aaron Chen as an Olympics official, Susie Youssef as Dame Nellie Melba and Stephen Curry as Gough Whitlam. And, in inspired casting, Mark Humphries as idiot Liberal opposition leader Billy Sneddon, complete with a Shadow Cabinet featuring blokes with $50 notes in their jacket pockets instead of pocket squares. Because who doesn’t love background jokes and satire about rich elites?

Drunk History Australia isn’t always hilarious, though, as its charm depends a lot on whether the comedian telling the story is the sort of person you’d like to get pissed with. Something which is especially important if you, the audience, happen to be sober. Because, when everyone’s drunk, everyone’s laughing, but when you’re sober and they’re drunk, it’s generally not so cack-tastic unless the drunk person is someone you like and laugh at when they’re sober.