Everyone likes it when the cast and crew of a favourite old TV show reunite for a one-off special, right? But was a reunion of those responsible for the Andrew Denton-produced current affairs/comedy hybrid and new talent initiative Hungry Beast (2009-2011) something anyone apart from those involved with Hungry Beast asked for?

We’re going to go with “sort of” as our answer, as while Hungry Beast wasn’t a show we praised at the time, a peek behind the showbiz curtain is always interesting. Especially when there might be some insights into why a show didn’t always work.

But before we get into the reunion show, here’s a reminder of what Hungry Beast – which was the launching ground for Marc Fennell, Dan Ilic, Veronica Milsom, Lewis Hobba, Kirsten Drysdale and others – was like, taken from a review we wrote of the final episode:

…when it started out Hungry Beast was supposed to be at least as much about comedy as it was about current affairs. Which makes our number one question at this slightly pre-emptive wake for the programme: What happened?

The team exercised some quality control, perhaps? Kinda. Veronica Milsom’s appalling character Veronica Dynamite seems to have been retired, and while that’s definitely a victory for comedy, it was a victory which took at least two series of the show to achieve. And as the ever diminishing number of sketches which have appeared in the show haven’t exactly been funnier (a recent episode featured a series of parodies of board game ads where the games were existing board games reworked to reference something happening in the news, i.e. the kind of waste material which littered the poorer episodes of The Chaser’s War on Everything) it’s pretty much the worst kind of victory over bad comedy that there is: a victory for giving up rather than spending a little time working out why the bad sketches didn’t work and then NEVER MAKING THOSE MISTAKES AGAIN.

Which begs another question, why don’t the senior people in charge of shows like Hungry Beast (or for that matter Angry Boys, a show which on Chris Lilley’s past form was never going to be anything more than the same self-indulgent crap) ever take poorly-performing comedic talent aside and point out some home truths? Andrew Denton the co-creator and one of the executive producers of Hungry Beast has spent large parts of his career getting the mix between serious issues and comedy right, so where was he when If Lady Gaga Wasn’t A Popstar – a sketch literally anyone could have come up with – was being filmed? Or Liberals on Fire, which drags one not particularly interesting satirical observation out for more than 40 seconds. Any decent executive producer would have taken one look at sketches like these and demanded an instant re-write.

Would it surprise you to hear that we didn’t fly to Sydney for this reunion show?

However, we have listened to the audio recording of the reunion show, which was recently released on Dan Ilic’s podcast A Rational Fear and, well, it was pretty interesting… 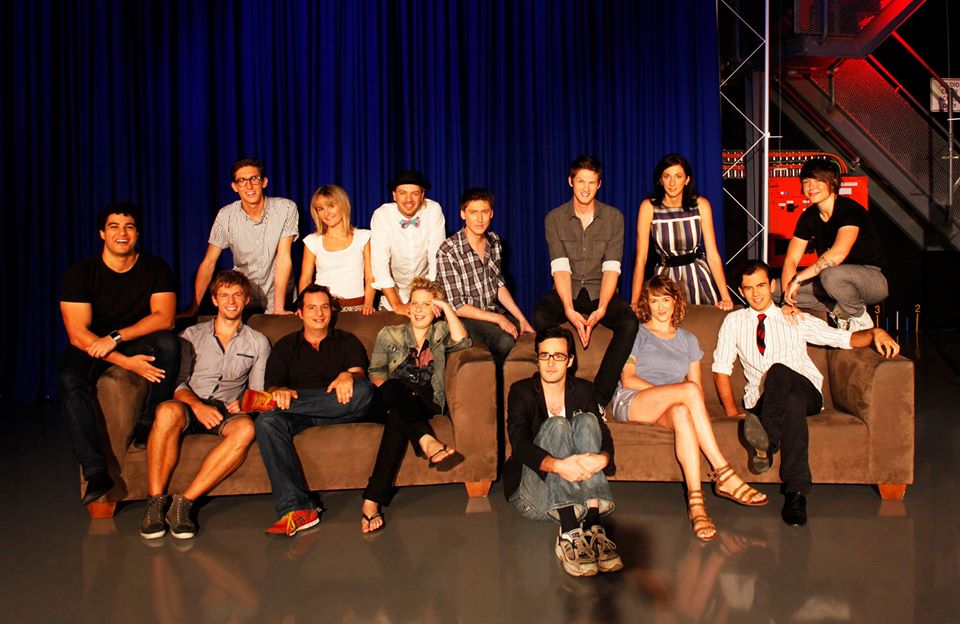 First up, in his introduction to the show, Ilic apologises for not putting out new episodes of A Rational Fear recently. His excuse? He and 7.30 satirist Mark Humphries (who also got his start on Hungry Beast, as an intern) are currently hard at work on an eight-part narrative comedy for Audible. Ilic’s promising to release a preview when he can.

Wow. Who knew? And as a blog which has long argued that Australian comedians need opportunities to get paid to make narrative audio comedy, we’re intrigued. More news on this show when we get it.

Then, introduction and apology completed, it’s into the reunion, which takes the form of a panel discussion. And one of the first things the Hungry Beast alumni discuss is what an exacting man Andrew Denton was and how he encouraged them to re-write and re-shoot material to make it as good as it could possibly be.

Good advice, of course, except the team found themselves doing lots of re-working. More than 30 drafts-type re-working.

Seriously, 30+ drafts? You’d give up at 25, wouldn’t you? Perhaps they did? And maybe that explains the quality level of the sketches that did make it air. Material which, presumably, had either had the life beaten out of it after 30+ re-writes, or which people were so sick of re-working that they just gave up and put what they had to air anyway. The Hungry Beast team would argue differently, of course, but it chimes with what we thought of much of the show’s comedy output at the time.

And let’s be honest, Hungry Beast doesn’t have a great comedy legacy. Of those from the team who are still working in the media, only a handful are working in comedy. Marc Fennell is the occasionally amusing but mostly serious host of The Feed and Download This Show, Veronica Milsom and Lewis Hobba have a show on Triple J which, again, includes a lot of serious content, Dan Ilic is comedian working in various mediums and Mark Humphries has that slot on 7.30. Everyone else from Hungry Beast is working as a serious journalist or host, or works behind-the-scenes.

Hungry Beast is evidence that new talent initiatives can work – and many of those who were part of it have gone on to achieve great things – but not so much that new talent initiatives for comedy work. Up-and-coming comedians need creative freedom and opportunities to make lots of mistakes in a safe space, and starting someone out on a TV show in a primetime timeslot is a big ask. Audiences expect a lot from primetime and Hungry Beast’s comedy did not meet expectations.