We don’t usually bother with The Australian, which is one thing we have in common with the entire Australian population, but this did manage to catch our eye: 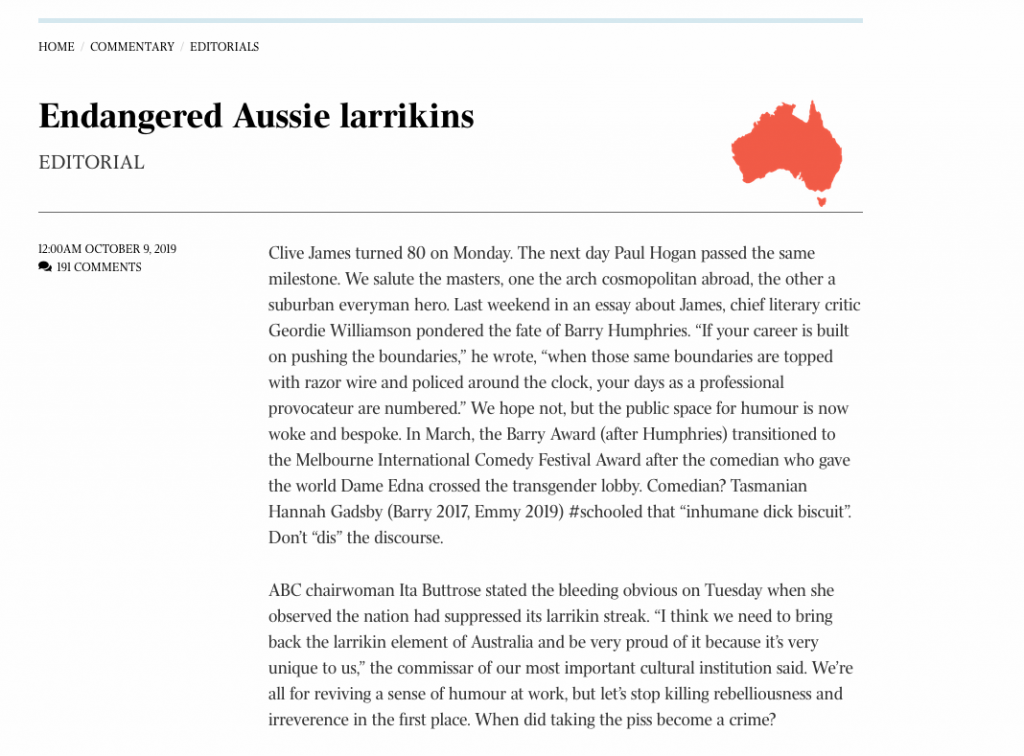 Others have pointed out the irony of The Australian leaping to defend comedians they sued (successfully) over a joke; The Australian having spent the last decade or two demanding the ABC’s funding be cut to pocket money levels didn’t go unnoticed either. You can read it here, but why give them the clicks? 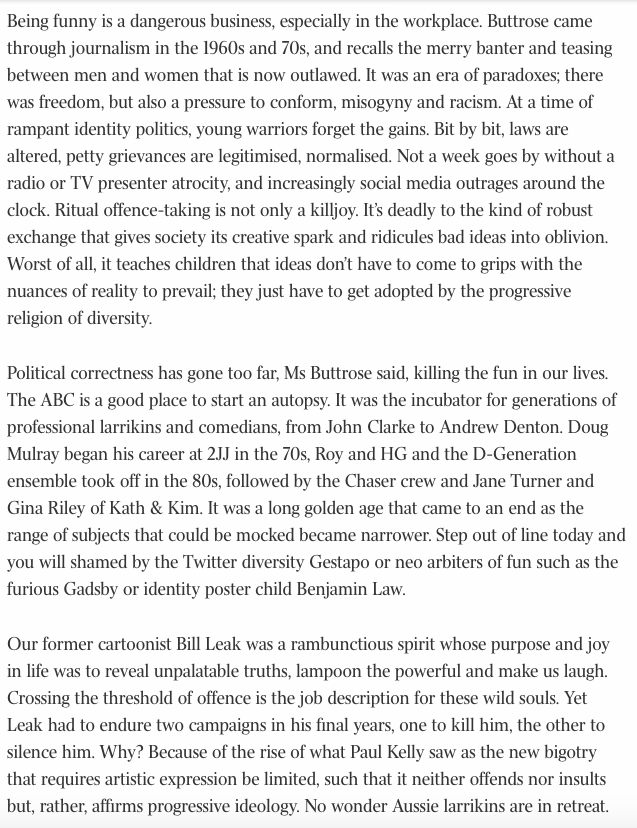 Who said comedy was dead in this country? Oh right, that was us. How did we miss the campaign to kill Bill Leak?

Obviously this is complete bullshit from top to bottom, but it is moderately interesting to see which “professional larrikins” made the cut. For example, where’s Chris Lilley? You’d have thought he’d have definitely made the grade – but then that’d require the unnamed author to acknowledge that the golden age of shithouse mockery they’re mourning has lingered until… roughly six months ago.

(it’s also a big gap between the D-Generation and “The Chaser Crew” – what happened to comedy in the 90s? Oh right, John Howard)

Presumably the names named were named because they’re all currently not making comedy thanks to the “Twitter diversity Gestapo” – look, satire is dead now that Roy & HG aren’t getting steady work! Unfortunately yet unsurprisingly, they’ve fucked this up too (and not just by claiming John Clarke was “incubated” at the ABC, which must be a shock to both New Zealand and Channel Nine): the bulk of the D-Gen became Working Dog, creators of the strangely unmentioned Frontline – oh right, that was mocking shitty media, touch awkward there – and the just finished for 2019 Utopia.

See, if only The Australian been slightly more on the ball they could have made an argument that held a little more more water, because on one level Utopia is a prime example of what they’re complaining about. No, not the way you can’t show up at work in blackface while calling everyone you’ve been bullying a “poof”; the way Australian comedy no longer “reveal[s] unpalatable truths, lampoon[s] the powerful” and so on. But good news: there’s still lots of jokes about office printers.

Of course, Utopia isn’t really what they’re complaining about. Utopia is what you get when you – that is to say, News Corp and their Federal government allies – wage a relentless war on every level on the national broadcaster: a political “satire” that’s resoundingly toothless and firmly on the fence.

The underlying point of Utopia beyond the generic workplace comedy stuff it’s increasingly focused on is that all politicians are basically the same: obsessed with wasting money on big crazy projects that won’t achieve their stated goals.

This isn’t exactly untrue, but it’s just a generic anti-government message that’s pretty much useless as satire in Australia. It plays well to modern conservatives though – you know, drain the swamp and all that shit.

That’s not to say Utopia isn’t a well-crafted, polished piece of work. Working Dog are the best sitcom team in the country, and Utopia features wall-to-wall snappy dialogue that largely disguises the fact that every episode has the same plot: politicians love crazy expensive schemes that won’t work, the NBA top brass argue against them (and fail), and we get a bunch of wacky office workplace hijinx stuff in between. Inspirational speakers only want to talk about their depressing personal issues!

Still, after four seasons it’s starting to look a little… tired. Where once it was firm ABC policy to give scripted comedy two seasons then show them the door to make room for new series, increasingly the same old shows keep on coming back.

Upper Middle Bogan had three seasons before it wrapped, while Utopia has made it to four; Rosehaven‘s had three and there’s no suggestion it’s finished yet.

That’s not entirely the ABC’s fault: they’re so broke these days everything scripted is a co-production with international producers (even Utopia; Working Dog sold the first two seasons to Netflix and the third to America’s PBS), which means they’ll keep on going until the overseas money runs out (vale Please Like Me… after four seasons).

Throw in a free-to-air television viewership in decline (got to keep those old favourites running) and we definitely wouldn’t rule out a fifth season of Utopia just yet.

We’re not saying Utopia turned into a workplace comedy with a generic political message in an attempt to secure overseas money; those elements were there right from the start. We’re saying that it’s those elements that made Utopia attractive to overseas buyers (and if you don’t think Working Dog were aware of the overseas market, check out how many countries had their own versions of Thank God You’re Here).

In 2019 overseas finance is the only way a sitcom survives on the ABC and Australian issues don’t sell overseas – but that “Ask him to leave” “But it’s my office” joke? Money in the bank.

All of which means the real problem isn’t that the public space for comedy is now “woke and bespoke”; it’s that the space is now international and the overseas guys decide what gets made. If Ita Buttrose really wants to “bring back the larrikin element of Australia”, she needs to give the people making comedy in this country enough money to make comedy for this country.

“When did taking the piss become a crime?” When it turned out the overseas producers who now pay for Australian comedy didn’t know what the fuck “taking the piss” meant.