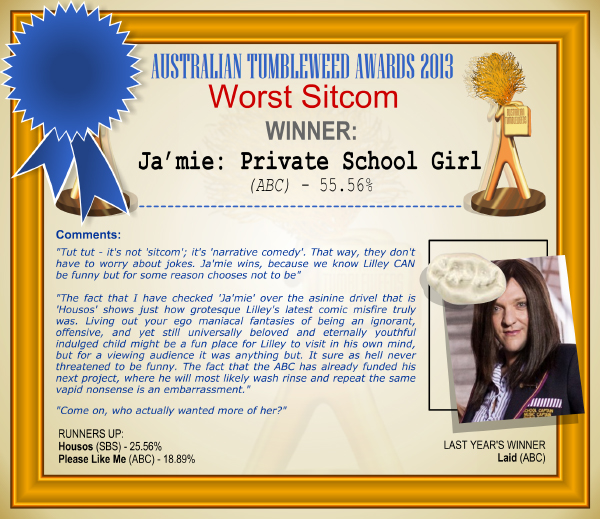 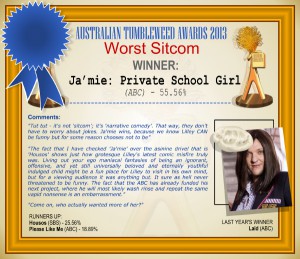 Australian Tumbleweed Awards 2013 – Worst Sitcom – WINNER: Ja’mie: Private School Girl – 55.56%. Comments: “Tut tut – it’s not ‘sitcom’; it’s ‘narrative comedy’. That way, they don’t have to worry about jokes. Ja’mie wins, because we know Lilley CAN be funny but for some reason chooses not to be.” “The fact that I have checked ‘Ja’mie’ over the asinine drivel that is ‘Housos’ shows just how grotesque Lilley’s latest comic misfire truly was. Living out your ego maniacal fantasies of being an ignorant, offensive, and yet still universally beloved and eternally youthful indulged child might be a fun place for Lilley to visit in his own mind, but for a viewing audience it was anything but. It sure as hell never threatened to be funny. The fact that the ABC has already funded his next project, where he will most likely wash rinse and repeat the same vapid nonsense is an embarrassment.” “Come on, who actually wanted more of her?” LAST YEAR’S WINNER: Laid (ABC).