That’s Not A Comedy

Probably the most annoying thing about The Very Excellent Mr Dundee (now available on Amazon Prime) is that it didn’t have to be shit. It’s hardly a surprise that it is thanks to a whole range of factors including but not limited to it being an Australian comedy film starring Paul Hogan, but still: watching it (our recommendation: don’t), there’s just enough signs of life scattered throughout to make the constant dull thud as joke after joke clangs leadenly to the ground more painful than it needed to be. It was never going to be good, but it didn’t have to be this bad. 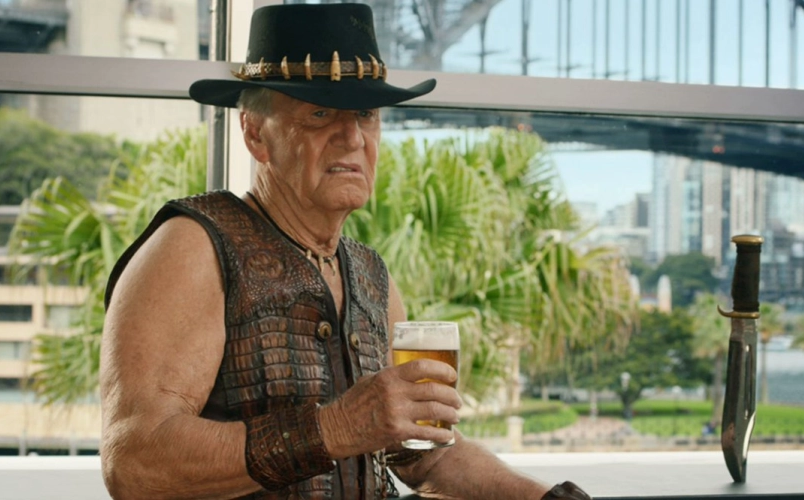 This isn’t actually in the movie, possibly because it’s funny

It’s tempting to say the rot started with the central concept, which is “hey, it’s Paul Hogan’s real-life adventures in Hollywood, only not really”. It’s true that the idea of a wacky “look behind the curtain” at a faded comedy star is both fifteen years past its use-by date and something Peter Moon already did. But it’s not a irredeemably bad idea, especially for Paul Hogan, knockabout Aussie larrikin. So of course, this instead gives us Paul Hogan, sad burnout who’s sick of the celebrity life and just wants to move back Down Under. Comedy!

Having thrown out literally the only comedy premise that’s ever worked for Hoges in movies – that of a charming fish out of water – this decides to go the Hollywood satire route, as Hoges (as himself) goes through a string of disastrous comedy mix-ups that constantly put him in the headlines for all the wrong reasons. Two of these mix-ups involve (accidental) racism, and even though both times the film makes it pretty clear that racism is bad, if racism is bad (it is) why have your comedic lead be racist? Hoges works on screen as a likable decent guy, not some edgy comedy firebrand; considering the director also directed Hoges’ three previous films (Charlie & Boots, Strange Bedfellows and the awful That’s Not My Dog) even this mild accidental racism in 2020 seems like a fairly fundamental misunderstanding of his comedic persona.

So the premise doesn’t work and Hoges is playing against type: what else can go wrong? Having no actual story doesn’t help matters, as this is just a series of one-note scenes that go in circles without escalating or developing in any way until suddenly there’s a time jump and everything gets resolved. The awkward scenes do get bigger as they go from bad business meetings and angry fan events to car chases and a helicopter catching him hugging a blow up crocodile in his back yard, but they never build to anything and the whole “stay out of trouble or the Queen won’t give you a knighthood” angle isn’t exactly a high stakes drama in the first place.

And yet somehow despite looking like it was filmed for seven dollars in a generic suburb with “Hollywood” painted on a fence, it’s not a total loss. You wouldn’t think filming a bunch of celebrities saying shit about Hoges at a red carpet event for something else entirely would be all that funny, but the one thing this does have going for it is that it’s perfectly happy to go after Hoges hard. Well, during the Hollywood parody scenes at least – there’s plenty of sappy crap with Hoges and his granddaughter (weirdly, her mother is never mentioned) to let us know he’s a decent bloke at heart no matter what the media says, but the media gets the edge here because they’re mildly amusing and his granddaughter can’t even manage that.

Paul Hogan is now eighty, and there’s no good reason to think he’ll ever make another film. This would be a bum note to go out on, but it’s not that much worse than 2001’s Crocodile Dundee in Los Angeles or any of the other movies he made in the 90s so it’s hard to feel particularly bad for him. It’s more frustrating than anything else; even at eighty Paul Hogan still has decent comedy chops when required, charisma to burn and enough name recognition to get movies made.

This whole thing just feels like a waste of his talents, limited though they may be. Even now, it’s easy to imagine him making better films than this – and not just because it’s hard to imagine films much worse.

Similar Posts
How to Please a Comedy Fan
How to Please a Woman is an Australian comedy film, and we’ll stop right there because when it comes to...
Read More »
It’s a Fraud, I Tell You!
Why would you make a movie in Australia? Sure, there’s generous tax breaks, plenty of skilled tech crew, stunning locations,...
Read More »
Lover Come Back to Me
Hey, Josh Lawson’s got a new movie out! Though you’d be forgiven for having missed it, as this time around...
Read More »