A few commentators have remarked recently that at this point in lockdown they’re running out of things to do. They’ve got through all those shows they’d planned to watch on Netflix, they’ve cleared out the spare room, they’ve re-painted the shed, read most of the books they’ve been meaning to read…now what?

So, we find ourselves scrolling through the depths of iView looking for a comedy we haven’t reviewed yet, and we come across the 2017 web series 600 Bottles of Wine. It’s been sold to the BBC and TVNZ, so it must be okay, right?

Claire (Grace Rouvrey) has recently split-up with long-time partner Nick (Ryan Madden) and is trying to move on. On one of her regular, wine-fuelled nights out in the pub with friends Nat (Nerida Bronwen), Timmie (Nancy Denis) and Harriet (Stephanie Baine), she decides to have a one-night stand. She selects a target, a guy at the bar called Liam (Adam Franklin), and the two hit it off. In fact, it seems like maybe this will go further than one night. But no. 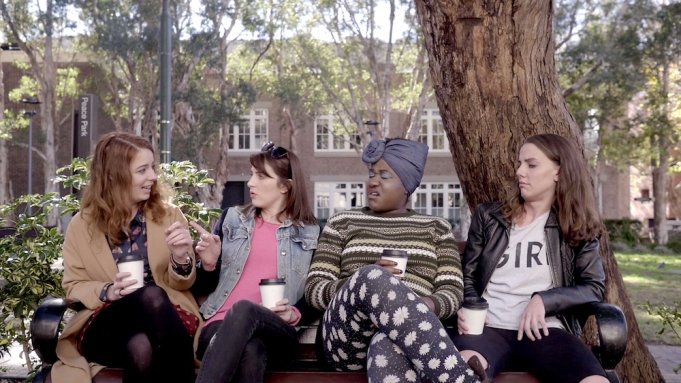 Later, Claire gets into a relationship with Pat, a charming man, who also likes wine, and makes her cocktails at his home (earning himself the nickname “Negroni”). But, eventually, his busy career in advertising and regular fitness sessions with a female colleague make Claire nervous. Plus, there’s a pregnancy scare, Nick returns, Claire receives a bunch of relationship advice, and a hot guy called Huw (Andrew Shaw) starts working at her office. Is it bye-bye Negroni?

If you’re looking for a satisfying ending or social commentary beyond “relationships are fraught and well-meaning advice isn’t always helpful”, you won’t get that from 600 Bottles of Wine. And if you’re looking for a feminist take on heterosexual relationships, one that involves the female protagonist not nearing breakdown because of the crap men in her life, this may also not be for you.

You also won’t get a huge number of laughs. The sex scene with Liam has its moments, and it’s always good to see a sex scene from the female perspective, but, as so often, Fleabag did it better.

What 600 Bottles of Wine does do well, is to document a certain type of millennial female friendship group, and the men they date. It’s maybe not that different from what previous generations of women have experienced, but at least this is from an all-female team: writer Grace Rouvrey, director Ainslie Clouston and producer Bec Bignell.