Sweetly crackin’ winners through the gap

If we can take anything from the last few months worth of news, it’s that the Morrison government doesn’t give an actual damn. Climate change? Nah, don’t worry about it. Money to sports clubs in marginal electorates? Here’s a truckload! All of which should give our satirists plenty to talk about, you’d think.

Mark Humphries’ first sketch of the year for 7.30 focused on the Sports Rorts scandal. It started off as a parody of Wide World of Sports, in which two hosts analyse what happened, before throwing to an ad break, during which there are several spoof ads for products that may be of interest to rorting politicians. All fair enough as targets for satire, of course, but not especially hilarious. So, standard stuff from Humphries, there.

Sammy J, meanwhile, re-wrote late-1970s cricketing anthem C’mon Aussie C’mon! as C’mon Pollies C’mon!, an entreaty to our leaders to lift their game when it comes to bushfires, global warming, sports funding and various other current issues. He’s done better – and there’s a problem here, in that the song is too fun and upbeat to properly convey his anger and frustration at the political class – but it’s hard to argue with the intended sentiment.

Meanwhile, on Shaun Micallef’s Mad As Hell, Micallef only needs to put a small pause between ‘Our Prime Minister’ and ‘Scott Morrison’ to get a laugh (and make a point). And he’s been doing that exact joke and making that exact point (albeit with a range of different Prime Ministers) for years. 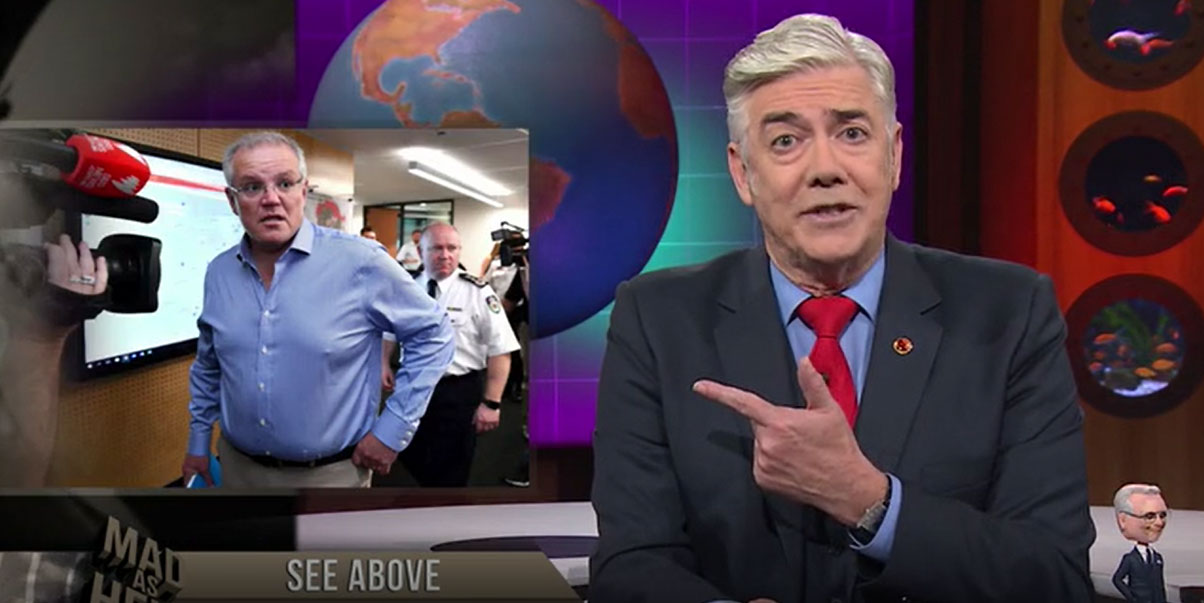 So, why is Micallef’s pause funnier than two whole entire sketches? Well, what it comes down to is the quality and uniqueness of the observation being made.

Most of us have spent the last few months, nay years, wishing our politicians were better. And not just our politicians, most of the world’s politicians, frankly. So, several minutes of song, repeating that one thought over and over again, isn’t really going to cut it when it comes to satire.

Similarly, the fact that certain sports clubs only got funding because they were in marginal elections, isn’t news to us. Because, you know, we’ve seen the news. So, to make us laugh there’s got to be a new observation in there.

Whereas Micallef’s pause? Sure, it wasn’t a new observation either – the high turnover of Prime Ministers in the last decade or so has been much talked about – but it was funny because it didn’t labour the point. It didn’t spend two and a half minutes on this one observation, it spent less than a second on it.

And every time it gets repeated, it’s perfectly timed – and, crucially, surrounded by jokes about other things. It’s not the same point being made matter-of-factly for several minutes, which is what you get in C’mon Pollies C’mon and Mark Humphries’ work. Or, to put it another way, it doesn’t feel so much like a lecture.

Cynics reading this blog probably think this is yet another love letter to Mad As Hell from Australian Tumbleweeds, or something. But it’s not. This is a plea to our satirists to raise their game. C’mon Satirists C’mon! in other words.

Similar Posts
Body Count’s in the House
It’s barely over twenty four hours now since Aftertaste delivered its most shocking development yet. For five episodes crusty old...
Read More »
Why Should We Watch This?
Big question first: should the cast of new ABC / Netflix sitcom Why Are You Like This? be filed under...
Read More »
How Do You Solve a Problem Like Hughsey
Hughsey We Have a Problem is back for 2021, which is great news for people putting together a Hughsey soundboard...
Read More »