Remember when The Chaser were funny? Yeah, we’re struggling too. At least now there’s social media to tell them when they’ve fucked up, because clearly they can’t tell themselves. 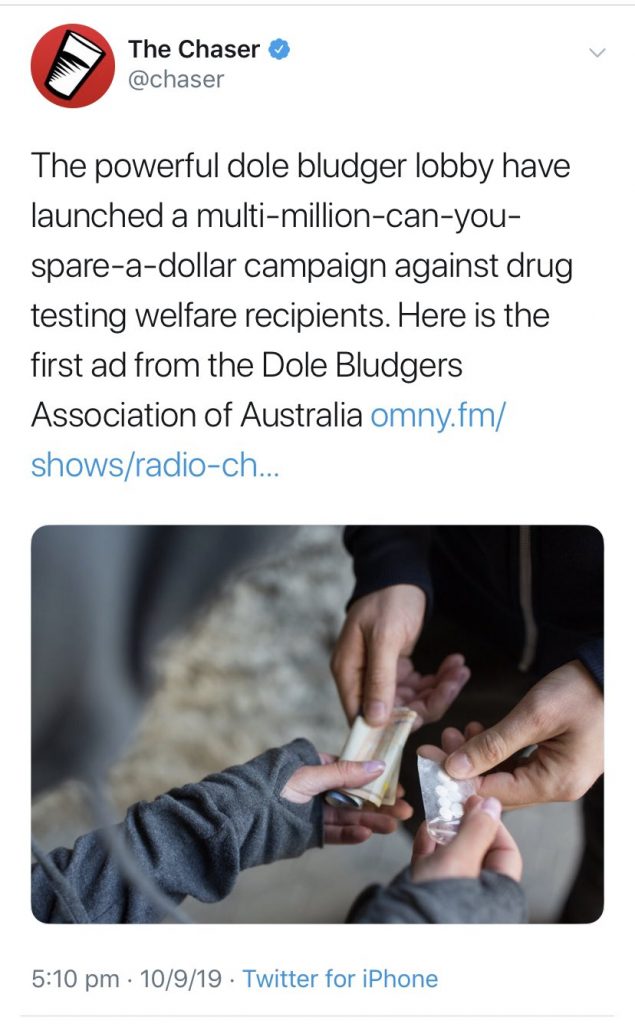 It’s the first ad from the Dole Bludgers Association of Australia, and we’re guessing it’s going to be the last: this was taken down sometime last evening after, well, pretty much everyone who heard it got on twitter to give it and The Chaser a good kicking.

In other words, we're sorry. https://t.co/VQZfn4OZx9

And a good kicking it deserved. Not necessarily because it was “punching down”, but because it was shit in concept and kak-handed in execution. Basically it was 40-odd seconds of a junkie voice whining that if people stopped taking drugs they’d be boring arseholes like Scott Morrison. Oh ho ho ho.

Like, there’s the faint outlines of a joke here. “Drugs are good because they stop you being like Scott Morrison” is not the most absolutely stupidest view you could express in a comedy bit. “What if the last group you’d expect made a political commercial?” is a reasonable starting point for comedy. But the bit was just rubbish – it wasn’t even a decent excuse to do a comedy junkie voice, and if you can’t make junkies funny you need to get out of comedy now.

Of course, The Chaser are absolutely the last people who should be making any jokes at all about junkies. It’s not that they all come from Sydney private schools* because quite possibly some of the people they have writing for them don’t; it’s because the attitude spread across all of their comedy for a number of years now has been 100% entitled Sydney fuckwit and it hasn’t done their material any favours at all.

“Every weekday lunchtime join original team members Charles Firth and Dom Knight for a daily radio programme with the characteristically unpredictable Chaser shenanigans”. But at this stage they’re not “characteristically unpredictable”; they’re bland, vaguely right-wing in their underlying assumptions about society, and way less funny than they should be considering all the decades of well-paid practice they’ve had.

This wasn’t a case where a sketch “went too far” and offended a bunch of knee-jerk lefties who hate laughter; this was a shit sketch that didn’t even know what it was trying to say, let alone where the joke it wanted to make was. The Chaser shouldn’t apologise because they accidentally supported the governments views; they should apologise because they wrote, performed, and put to air a sketch so muddled and amateurish that even regional primary school community radio would have said “yeah, maybe not”.

That said, if you can’t tell the difference between mocking a right-wing government’s attitudes and endorsing them until after you’ve put a frankly shithouse sketch out into the world, then maybe it’s time to give up comedy entirely and start submitting your sketches straight to Quadrant.

*okay, Craig Reucassel went to a public school… in Bowral, which as Wikipedia points out, is “noted for its boutiques, antique stores, gourmet restaurants and cafés”